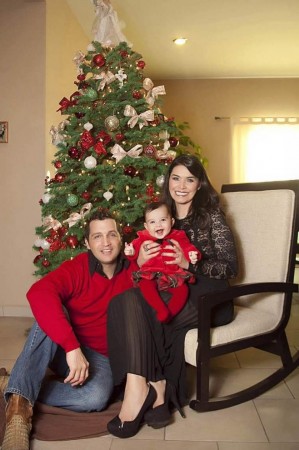 I was young, afraid and desperate to reunite with my family in the States so when asked at the border if I was a U.S. citizen, I said yes. And although I recanted immediately, I had broken the law and the punishment for this false statement is being barred from the States for life. At the time in 2001, I had no idea of the horrific consequences of my action. I was turned back after admitting I wasn’t a citizen but I managed to get across the border without inspection a few days later. I had been living in the States for four years but had returned to visit a dying grandfather. Now back with my mom, dad and three brothers, I went on with my life in Phoenix, not realizing that my momentary claim to citizenship would affect me for decades to come, maybe forever.

When I was 31, I met my husband Alex. He had just returned from his last tour of duty in Iraq. We fell in love and were married in 2010. He’s now a civilian flight instructor at a U.S. Air Force Base in Texas, training young USAF pilots. He has served his country for 30 years and is well respected as a decorated pilot in high-risk areas like Somalia, Bolivia, Colombia and Iraq.

One year after we were married, I had to leave the States because of my undocumented status. It was 10 years after the 2001 border-crossing attempt. Alex was able to get a posting with the State Department in South America so we could be together. As a military dependent, I’m allowed on any U.S. installation around the world where other families are welcome – every base except ones in the U.S. While stationed in Colombia in 2013, Alex applied for a visa for me with the U.S. Embassy. Our baby, born on the 4th of July in Mexico, became a U.S. citizen through my husband’s State Department application. However, I desperately needed a visa to be able to return with my husband to his next posting in Texas. Our request was denied citing my lifetime ban. It was heartbreaking.

Now I live in Mexico with our baby girl while Alex continues to serve his country in Texas. It’s hard on all of us. The baby has trouble remembering her father from one visit to the next. Though we Skype a lot, it’s not the same. There are no hugs and kisses. And we’re not safe where we are, not with all the kidnappings and murders in my region of Mexico.

Since Alex still works for the U.S. Air Force, he may be deployed outside the States. I can understand and accept our separation during these times. However, now he’s based in Texas and we’re forced to live apart because of something I recanted 14 years ago before I even met him. He shouldn’t be punished for my lapse of judgment. For the past three decades, he’s proven his dedication to serving his country. Alex comes from a Cuban-American family which has a history of service in the armed forces and as teachers and firefighters. He and I both love this country and just want to be together as a family.

For four years, Alex has petitioned the State Department, Texas congressional leaders and state officials. There seems to be no appeal for a lifetime ban, though there is some talk of an adjudication review. We are forever hopeful but our hopes are being constantly bashed by the bureaucracy. The State Department has consistently refused reconsideration of my case under 9FAM-Timely Retraction which would allow me to apply for a visa under a cumbersome and unpredictable 601-waiver process.

I’m not a terrorist. I’m a good person, wife and mother. If we hadn’t been forced to leave the country, we would have been eligible for a later ruling that granted military parole, allowing family members to stay with service members while their cases were being reviewed. We applied for this last February with a very persuasive package, including positive recommendations from high-ranking officers who serve with Alex. In the end, it didn’t matter. We were denied humanitarian parole in June. We were devastated.

My husband’s Air Force superiors have been most supportive, adding their letters of support to his petitions to lift my lifetime ban and allowing him to serve three weeks on and two weeks off so he can travel to Mexico to be with his family. Alex has three daughters from another marriage, two are in college and the 14-year-old lives with his first wife. Since they live in Texas, only a two-hour drive from the base, he’s able to see them on weekends. Alex is devoted to all his children.

I worry about my husband who continues to serve his country while being so tormented by his inability to get relief from the government he fights for. He just wants his family to be together.

That’s all we both want. I am so sorry that I lied to a border agent 14 years ago when I was simply trying to return to my family, but I’ve suffered enough and so have my husband and baby. I’ll do whatever it takes to prove I’m worthy of a visa. I’m 36 years old and have lived in the U.S. 16 of those years – almost half my life. Just as Alex has made his country proud, I promise to do the same.