Valerie R.- DACA Recipient Gives Back To The Community 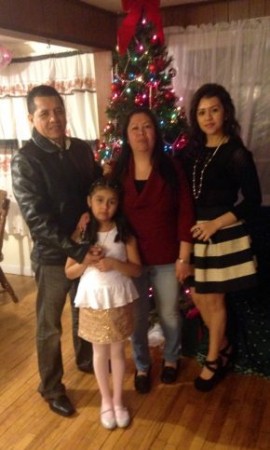 e both of us were trying to reunite with my mom already living and working in Wisconsin. I had no idea of how hazardous our journey was. My dad and I had flown from Mexico City to Mexicali where we were supposed to pay for a coyote to take us both across the border. But there was no money for the crossing because my uncle stole the money my mom had sent. After a week in Mexicali, I was smuggled with false papers in a car while my father walked through the desert. Another week passed in a San Diego safe house while I waited for my father. I was alone and fearful, even though I didn’t realize all that could have happened to end my family’s dream, to end our lives.

I’ve been in the States now for 15 years and I live with my mom, dad and seven-year-old sister. I’m eligible for DACA and both my parents are eligible for DAPA. I wasted no time in taking advantage of President Obama’s lifeline, applying one month after his 2012 announcement. Now that I’ve graduated from high school, I see a future. I have choices. I can apply for jobs I never thought I could have – real jobs. I have a driver’s license, state ID and Social Security card. I’m working to save for college, despite the fact that the governor has rescinded immigrants’ ability to pay in-state tuition. Some colleges still offer this but none connected with the state university system.  So I keep working and gaining experience, including a job as a bilingual receptionist for a daycare center.

I think it’s important to give back to my community, so I volunteer with Voces de la Frontera, Wisconsin’s largest immigrant rights’ and workers’ center, and YES, the Youth Empowered in the Struggle student organization. I think of the U.S. as my country and I’m determined to stay as a living affirmation of its promised equality for all. I believe we are all friends of God, inseparable by borders, race, color – all working for a better life for ourselves and our families. I live by this belief: yo estoy aqui, tu estas aqui hasta la victoria, porque juntos estaremos lunchando hasta el fin. I have earned a place in the U.S. and I’m willing to fight for it.