During his annual address to ambassadors at the Vatican on Monday, Pope Francis once more bemoaned the hostile climate in the West toward refugees and migrants. He decried politicians who demonize foreigners "for the sake of stirring up primal fears" and urged greater global action to help asylum seekers. "In the Judeo-Christian tradition, the history of salvation is essentially a history of migration," said the pontiff.

That's a message that clearly doesn't register with President Trump, who has loudly staked his politics on rejecting immigrants and sealing borders. On the same day as the pope's speech, the Trump administration announced that it would terminate provisional residency permits for about 200,000 Salvadorans who have lived in the United States since 2001. Trump had already ended such arrangements for Nicaraguans and Haitians, and will likely follow suit later this year with Hondurans. The Salvadorans who have received what's known as Temporary Protected Status, or TPS, now have until September 2019 to either obtain another form of legal status or leave the country.

Those in the program were initially granted TPS in 2001 after earthquakes ravaged the Central American nation; previous administrations extended the status 11 times thereafter. Now, tens of thousands of Salvadorans who consider the United States home face a harrowing, uncertain future, including the prospect of arrest and deportation. Some 192,000 U.S.-born children have at least one Salvadoran parent who holds TPS.

"I consider this my country," Oscar Cortez, a 46-year-old plumber who built a life and family in the Washington suburbs, told my colleagues. "Behind us there are children and wives and nephews and nieces and mothers and fathers who depend on us. It doesn’t affect one person. It affects a ton of people."

"Salvadorans have been beneficiaries of this program for so long. It created an illusion that this would lead to a permanent residency," one Latin American diplomat said to my colleague Joshua Partlow. The prospect of losing this status is “going to be very, very disappointing, not only back in El Salvador." Oscar Cortez, a plumber living in Maryland, is among workers from El Salvador who may lose their protected status. (Bonnie Jo Mount/The Washington Post)

For Trump and his allies, their plight does not seem important. It doesn't matter to Trump that his sweeping edicts sow panic among people who have started businesses, paid taxes and contributed to the U.S. economy and society. The only Salvadorans with political value for him appear to be gang members, whom Trump can — and frequently does — mention to raise the specter of drug violence and fire up his anti-immigration base.

"Trump administration officials have repeatedly said they considered the TPS program an example of American immigration policy gone awry, noting that when Congress created the designation in 1990, its purpose was to provide 'temporary' protection from deportation following a natural disaster, armed conflict or other calamity," my colleagues Nick Miroff and David Nakamura reported. A statement from the Department of Homeland Security noted that the disaster conditions that prompted the original provisions for Salvadorans no longer exist in El Salvador.

But critics were quick to point to the State Department's own warnings about the scale of violence in the nation, home to "one of the highest homicide levels in the world," where "crimes such as extortion, assault and robbery are common." If fears of gang violence are sometimes cynically overstated in the United States, they are all too real in El Salvador itself. (The New Yorker's Sarah Stillman just wrote a lengthy article on the shocking fates that await many deportees in Central America.)

0:52
'We have to fight:' Demonstrators protest end of TPS for Salvadorans
Embed
Share

Protesters gathered in front of the White House on Jan. 8 to defend Temporary Protected Status for Salvadorans living in the U.S. (@nostredamnz/ Instagram)

The country's financial health will also be threatened: Salvadorans in the United States send home billions of dollars in remittances each year, forming a vital plank of the impoverished nation's economy. Trump's decision will "not only will uproot families and children who have lived here for years, it also will further destabilize an already violent country," Kevin Appleby of the New York-based Center for Migration Studies told Miroff and Nakamura. "It is incredibly shortsighted and undermines our interest in a stable Central America."

"El Salvador is simply unprepared, economically and institutionally, to receive such an influx, or to handle their 192,700 U.S. children, many of them at the perfect age for recruitment or victimization by gangs," noted the International Crisis Group last month. "At a time when levels of violence remain extraordinarily high, with exhaustion toward an unwinnable conflict voiced on both sides, the arrival of thousands of migrants back to their crime-affected homeland would impose huge strains. To escape its perpetual violence, El Salvador needs support, not the recurrence of past mistakes." 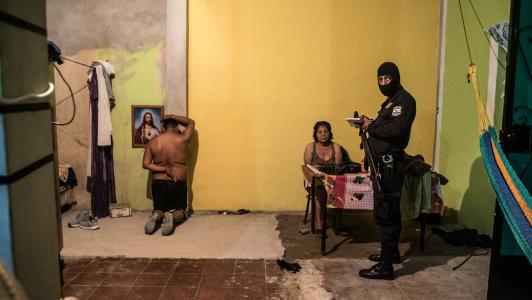 But, under Trump, the tacit understandings that governed federal policy on immigration and foreign policy are being shaken. His politics are built on an image of the United States as a passive victim of foreign menace, exploited, hoodwinked and infiltrated by all sorts of dangerous outside actors. "America first" demands that he ignore the pleas of Salvadoran officials, much as he frequently complains about the threat posed by programs such as the "diversity-visa" lottery or U.S. commitments to resettle thousands of refugees every year.

It also demands amnesia over the United States' own impact abroad, including Washington's role in the civil war that wracked El Salvador throughout the 1980s. The powerful MS-13 gang — cast by Trump as an alien threat ensconced in U.S. cities — actually has its origins in Los Angeles; deportations of Salvadorans with criminal convictions in the 1990s helped the organization to take root in El Salvador and to initiate years of hideous turf wars.

As was the case with Trump's series of attempted bans on arrivals from certain Muslim-majority countries, the move here seems anchored less in any substantive policy than mere mean-spirited ideology. "The Trump administration says it wants permanent solutions," wrote Vox's Dara Lind. "But in its first year, its immigration legacy has been to move more and more people into contingency and vulnerability."

Like Loading...
Previous article 'It's a mess': DACA negotiations hit a snag ahead of White House meeting Next article From Offices to Disney World, Employers Brace for the Loss of an Immigrant Work Force