President Trump on Monday expanded a measure restricting visas to the United States to target many more temporary foreign workers, limiting immigrants from coming to the country for employment in industries including technology, academia, hotels and construction.

Yet it also comes with broad exemptions, such as for many potential agricultural, healthcare and food industry workers. It does not change the status of immigrants already in the U.S.

In the order, Trump wrote that admitting workers to the country within the targeted visa categories “poses a risk of displacing and disadvantaging United States workers during the current recovery” and “would be detrimental to the interests of the United States.”

Amid his administration’s struggle to respond to the coronavirus, Trump has cited high unemployment as the primary motivation for moves to restrict immigration, such as a bar on most new green card applicants that will also be extended.

Administration officials estimated the move would “protect” more than 500,000 jobs. Yet neither the president in the order itself nor senior officials who described the measure on a Monday press call provided much evidence to back the claim that immigrants have taken jobs from Americans out of work in those fields because of the virus. The latest measure would mostly target “nonimmigrant” visa categories.

Doug Rand, a former Obama administration official who is a cofounder of Boundless Immigration, said Trump officials have been “ratcheting up work visa restrictions” from the administration’s outset, when unemployment was low.

“The pandemic is just a pretext,” he said.

Underscoring often chaotic policymaking, one senior official, speaking on condition of anonymity, said the order would exempt au pairs. Yet the text of the order released hours later included au pairs in the restrictions, along with interns, teachers and camp counselors.

Based on fiscal 2019 data, the proposed measure — if kept in place for a year — could affect more than 550,000 potential immigrant workers, said Aaron Reichlin-Melnick, policy counsel at the nonpartisan American Immigration Council.

At the end of April, Trump signed a proclamation that restricted some new entrants from entering the country for 60 days who did not already have visas or other travel documents but included carve-outs for several categories of foreign workers and employers, as well as their spouses and children.

After coming under pressure from business interests, who argued work authorizations for immigrants in fields such as agriculture and health were crucial to the coronavirus response, the president instead issued in April a dramatically scaled-back memorandum than what he initially described as an executive order to “temporarily suspend immigration into the United States!”

But after announcing the restrictions, which primarily targeted potential green card applicants, Trump also faced criticism from immigration restrictionists, including in his own White House, who motivate his political base.

“Amending it or extending it, that we can do at the appropriate time,” Trump said in April, previewing Monday’s changes. “But it’s now signed.” 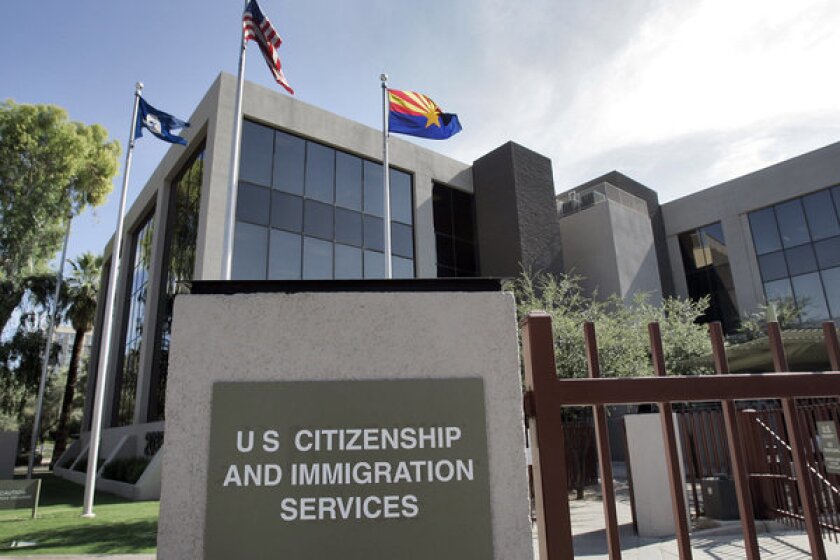 Opinion: Trump says his visa crackdown will help put Americans back to work. It won’t

Research shows immigrants strengthen the economy and typically don’t compete with U.S.-born workers for jobs or lower their wages. Most employment-based immigration to the U.S. already requires a labor market test to demonstrate there’s no available U.S. citizen to fill the position, and many of the affected industries, as well as Trump officials themselves, have advocated for more immigration, not less.

H-1B visas, for example, allow companies to hire workers with specialized skills that the American labor force cannot provide — and in recent years, about three-quarters of the annual supply of 85,000 H-1B visas have gone to workers in the technology industry.

Workers who receive H-1B visas are often paid less than their naturalized colleagues, and a 10,000-person survey conducted by the tech website OneZero in February found that many were left feeling trapped by an immigration program that linked their ability to work to sponsorship by their current employer.

That hasn’t curbed demand, from both individual applicants and sponsoring companies. Multiple studies have found that the American supply of IT workers is not enough to fill all the jobs being created by the country’s ever-growing technology sector.

But the Trump administration has made the application process more difficult. Since 2018, the rate of H-1B applications accepted has dipped, from a consistent acceptance rate above 90% from 2015 to 2017 to below 85% in the last two years, and many applicants report that the process has become more difficult to navigate.

At the same time, amid the coronavirus crisis, the Trump administration has also touted making it easier for agricultural workers to come from Central America to the United States to work in an industry it deemed “essential” to the coronavirus response. These workers would continue to be largely exempted from the latest restrictions.

As the administration urges a reopening of the U.S. economy and states start to ease coronavirus restrictions, it’s increasingly unclear how the latest measure and other prior steps to stem immigration are connected to public health.

Even before the emergence of the coronavirus, anti-immigration hard-liners such as White House advisor Stephen Miller sought to use public health to bar migrants.

Now, immigration to the United States has ground to a near-complete stop, primarily stemming from a March order from the Centers for Disease Control and Prevention that border authorities have cited to rapidly expel tens of thousands of migrants without due process, including asylum seekers and unaccompanied children. That order has been extended indefinitely, and Canada and Mexico have agreed to continue border closures barring nonessential travel through July.

Andrea Flores, deputy director of immigration policy for the ACLU, which has challenged these restrictions in court, said Monday of the latest proposals, “This is not a COVID-19 response or an economic response.”

“It’s the exploitation of a pandemic to institute divisive policies and reshape immigration law, while superseding Congress,” she said in a statement.

The administration has also threatened to shut down U.S. Citizenship and Immigration Services, the Homeland Security Department agency that administers the legal immigration system and many of the affected visas, citing a $1.2-billion shortfall, despite pausing most of the programs the fee-based agency manages.

And officials issued new regulations to make it more difficult for asylum seekers to work — or win asylum in the first place, though only a fraction of applicants ultimately do.

If immigration to the U.S. had not essentially been paused, the restrictions on green card applications would affect a large number of people — more than 350,000 if the ban remained in place for a full year, according to some analysts. More than 1 million foreign nationals obtained lawful permanent residence last fiscal year, about 45% of whom entered as new arrivals, according to the Homeland Security Department’s statistics.

As he gears up for his 2020 reelection bid, Trump has been increasingly frustrated by the broad perception that his administration has poorly handled the coronavirus response, and that he has not been able to fulfill the promises of his 2016 presidential campaign on signature issues such as immigration and “the wall” on the U.S.-Mexico border.

On Tuesday, after a Saturday rally in Tulsa, Okla., that fell far short of expectations, the president heads to Yuma, Ariz., to “mark the completion of 200 miles of new wall along the southwest border with Mexico,” according to a Department of Homeland Security release.

The department’s latest “border wall status” report shows that after nearly four years and some $15 billion in federal funding directed to the effort, despite completing projects to replace outdated and dilapidated fencing, in total, only about “3 miles of new border wall system constructed in locations where no barriers previously existed.”