The reality programming got all too real Sunday afternoon for the owner of a Santa Monica smoke shop known around the neighborhood as Moe’s.

The small-businessman had retreated to his home 10 minutes from the 4th Street shop when his in-store security cameras began to transmit sickening images. Intruders in masks and bandanas had pried open a security gate and smashed through his front door.

Now they were rummaging through Santa Monica Tobacco as though they owned the place. They took cigarettes, cigars, lighters and tobacco. One man grabbed piles of lottery tickets. Others smashed display cases. One crew came with a sledgehammer and pounded away until they broke open an ATM machine, emptying its cash. On the way out, many stopped to grab a snack and a drink.

“All I could do was watch. I couldn’t do anything,” said Moe, the owner, who declined to give his last name. “It felt like everything that I had worked to build for 18 years they could just wipe out in a matter of minutes.”

The shopkeeper was one of several along 4th Street, a block from the landmark Third Street Promenade, who complained that police did nothing to prevent the looting. Moe, an immigrant from Iran, wished the police had cut off the looters before they even got to downtown Santa Monica.

His neighbors, on the block between Santa Monica Boulevard and Broadway, said officers who stood close to the mayhem told at least one bystander that the looters had them outnumbered and that there was nothing they could do to end the trouble.

Santa Monica police did not immediately respond to a request for comment.

The smoke shop owner and several other neighbors said that, with the police out of the action, it was two owners and an employee of the venerable local music club Harvelle’s who became the heroes of the moment.

Harvelle’s co-owners Jason Gochin and Cevin Clark had been monitoring the trouble along with bartender Jose Rojas. When they smelled smoke, the grabbed the club’s fire extinguishers and made their way under the damaged security gate of the tobacco shop.

Once inside, they doused a fire that had been set at the back of the shop. Several tenants of the 4th Street building said the fast action prevented much wider damage, given that the 1920s-vintage building is not outfitted with a sprinkler system, they said. 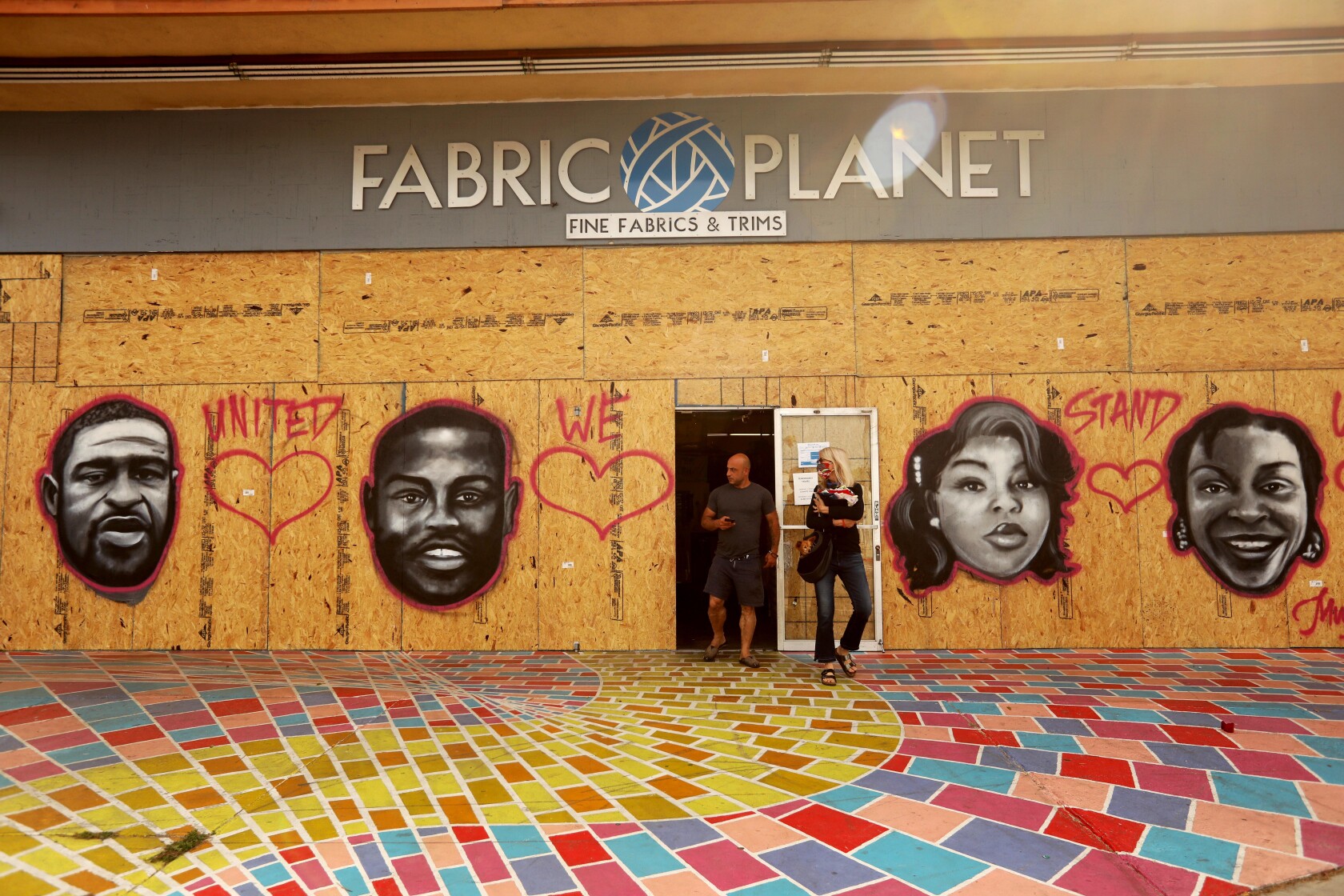 2/11
Jack Sapar, owner of Fabric Planet in Venice, walks out of his business with a customer.  (Genaro Molina / Los Angeles Times) 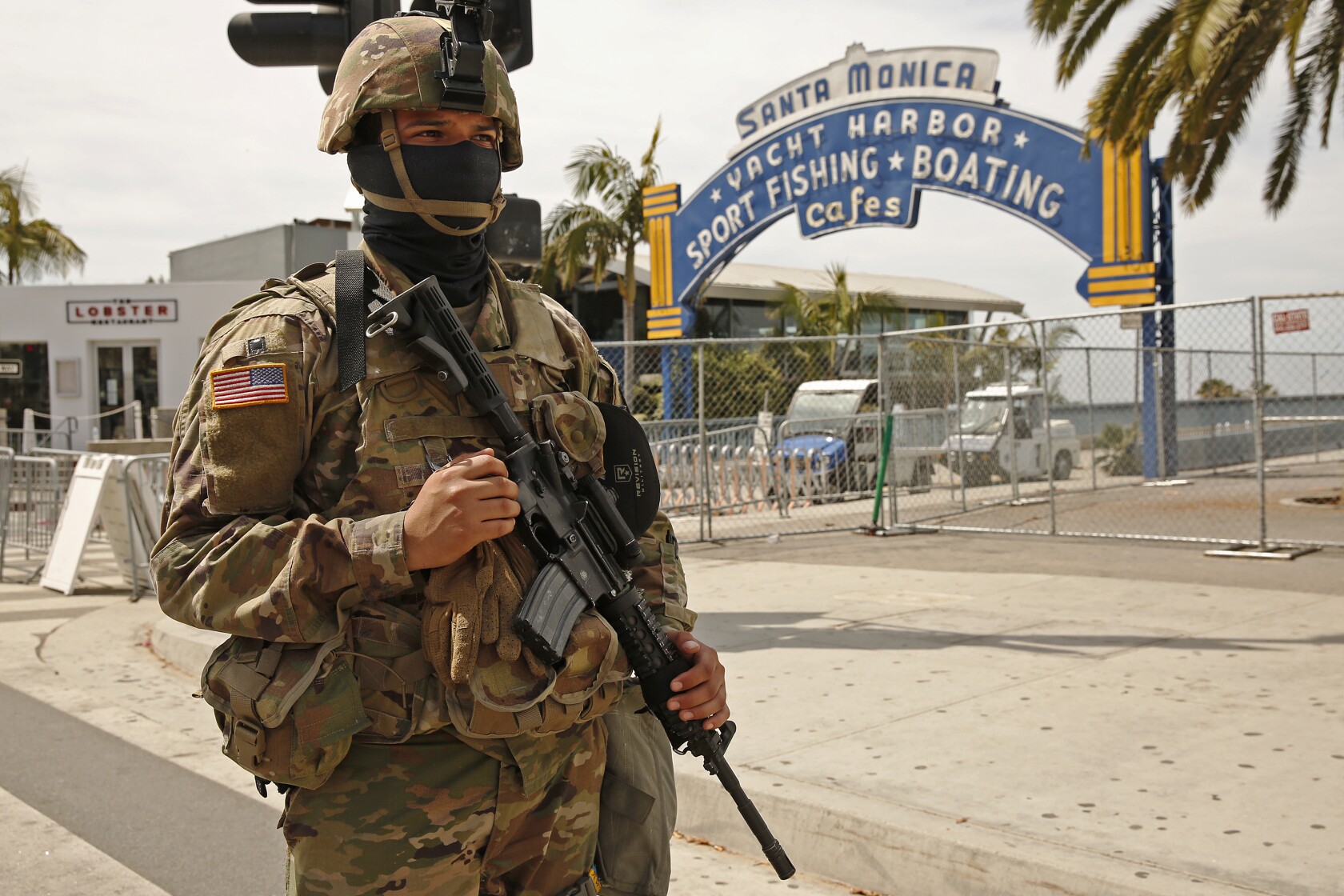 But, as downtown Santa Monica teemed with volunteer cleanup crews Monday, the merchants still wondered why the police had not done more.

“They protected the protesters, but they did not protect the businesses,” said Kia Saleki, whose family has run a jewelry shop on 4th Street for nearly 40 years. “If you want to protect the protesters, fine. I am with them. I feel their pain. But what about us, the mom and pop owners? We have already not been able to work for three months because of COVID. And now this.”

Saleki said he stood guard inside his shop Sunday, protected by a steel gate that looters tried, but failed, to pry open. He saw a stream of people enter the REI store across the street, emerging with arms full of clothes and other merchandise. Some cars circled the block and came back for more than one load, he said.

“A good Samaritan went to one of the police and said, ‘Stop them!’ and he said back, ‘What am I going to do? There are too many of them.’ “

Saleki said his family had immigrated to America from Iran and built the jewelry business painstakingly.

“As a small business, when you get hit, it’s hard to get back up,” he said. For now, he planned to board up his storefront and wait for calmer days. But he had no intention of closing his business, which had been on the verge of reopening from a coronavirus shutdown, before Sunday’s onslaught.

With business already down 70% during the coronavirus crisis, he said, he needs to get things up and running again.

“I have to. I don’t have any other choice,” said the married father of two elementary school children. “This is life. This is what happens. You fall down and you have to get up and walk again.”

Like Loading...
Previous article Trump Allies Try to Slash COVID Benefits for the Undocumented Next article Caught Between COVID and DACA