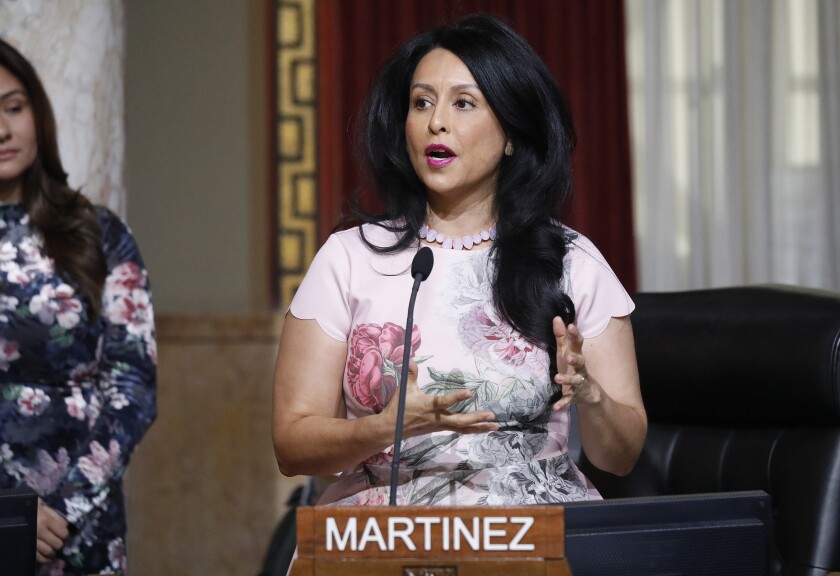 Los Angeles City Council President Nury Martinez wants to ban the city from handing out any building permits for private detention centers, including facilities that would hold unaccompanied immigrant minors.

The proposal, announced Friday, could thwart any effort to open a facility for unaccompanied minors in the Arleta neighborhood in Martinez’s district. VisionQuest, a for-profit company based in Tucson, has already retained a lobbying firm to help it seek approval from the city, according to city disclosures.

The site, once occupied by an assisted living facility, has been discussed as a possible facility for those ages 11 to 17 who entered the country as unaccompanied minors, according to city records. Martinez has denounced the idea, likening such facilities to prisons.

“I will not stand idly by and allow for-profit companies to get rich off of the anguish and suffering of immigrant children in Arleta, or anywhere else in Los Angeles,” said Martinez, who represents part of the San Fernando Valley.

Martinez added that VisionQuest has a “controversial background” and “should not be anywhere near immigrant children, many of whom are no doubt traumatized by the federal government’s inhumane treatment of them.”

“While we are seeking permanency for these youth, our job is to keep them safe, comfortable, well fed, properly clothed, educated, recreated and medically cared for, both physically and mentally,” Bender said. He described the company as “high quality and cutting edge” in its approach.

The Los Angeles City Council voted last summer in favor of banning the construction of private detention centers. But an ordinance to do that has not yet been drafted.

Martinez’s latest plan is meant to keep any private detention facilities — including sites for unaccompanied minors — from being built while the city’s lawyers prepare that permanent ordinance. The council is expected to vote Wednesday on whether to draft the temporary ban.

Bender said VisionQuest is seeking to operate a shelter that could house up to 120 children. The company has been working with migrant populations since the 1980s, according to its website.

VisionQuest hired the law firm of Armbruster, Goldsmith & Delvac last year to represent it as it seeks city approvals for the Arleta site, according to lobbying disclosure forms filed last year. In October, a representative from the Armbruster firm met with city officials to inquire about converting the building into a facility for “unaccompanied minors,” said Steve Garcia, a spokesman for the Department of City Planning.

The meeting focused on a possible proposal for a “federal government-contracted facility which will provide clothing, food, housing, schooling, and medical assistance to unaccompanied minors with the goal of finding long term homes with relatives, or within the foster care system,” according to a four-page report prepared by a planning staffer.

No application has been filed for the site at the corner of Woodman Avenue and Nordhoff Street, and no meetings have been held with the potential applicant since then, Garcia said.

Planning officials asked the Department of Building and Safety to hold off on issuing any permits until the city received “additional clarification” on the site’s intended use, said Yeghig Keshishian, chief external affairs officer for the planning department.

The notion of a detention facility in the northeast Valley — a heavily Latino section of the city — has drawn protests from activists and U.S. Rep. Tony Cardenas, whose district includes the Arleta site. Cardenas sent a letter to federal officials saying he opposes the operation of a VisionQuest center in his San Fernando Valley district.

“The very idea of such a facility goes against our Valley values of inclusion, respect, and compassion,” Cardenas said in a statement issued Saturday. “And I will do everything in my power to make sure that this detention center does not open in my district.”

Like Loading...
Previous article Democratic lawmakers visit camp in Mexico where migrants wait to claim asylum Next article The Fight to Save an Innocent Refugee from Almost Certain Death