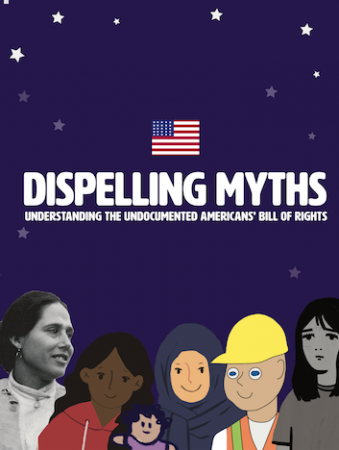 We, the Undocumented Americans, submit our Immigrants' Bill of Rights with the same determination as the nation's founders to incorporate these rights into the law of the land. We are the living embodiment of the American Dream and how we are treated reflects the country's commitment to its own ideals. Join us in upholding these ideals.

Since Congress refuses to act, it’s time we take matters into our own hands. Our Undocumented Americans’ Bill of Rights is a good start. Instead of making impregnable border security the beginning and end of all immigration discussions, let’s find a real road map forward.

While Congress’ attention is forever focused on building walls to the south where border security is already 84% effective, immigrants are flying in from all over the world, especially Asia, already 6% of the population. The patterns of immigration are changing. By mid-century Asians will overtake new arrivals from Latin America.

It’s time to end all the chest-thumping rhetoric about billions being poured into walls, military hardware and drones before any citizenship path is even discussed. Instead we must focus on making the most of the potential of the Undocumented Americans already here – not just for us, but for the country’s global competitiveness and the reinvigoration of its founding principles.

The issue of border security is simply a delaying technique, a distraction to avoid any real talk of inclusion, to discourage our initiative, to treat us like we don’t matter, that we’re not to be included in the nation’s future prosperity -- no matter how hard we work. The goal is to make sure we never forget that we once crossed a border without proper papers or overstayed our visas. We should be punished, sent back, often without due process, even though there is no there there. We are struggling families living in fear of being torn apart, not numbers to be moved from one side of the ledger to another. And we certainly aren’t animals to be rounded up and deported en masse.

We know we have human rights, even though our very presence is deemed illegal and our existence alien. Now we have our own Bill of Rights and we want it to be the framework for every immigration decision going forward from the local to the national level. Even as the federal government dithers, some states like California are providing Undocumented Americans with healthcare for our children, in-state tuition, drivers’ licenses, protection from unscrupulous employers and visas for crime victims. A few progressive states are already moving to incorporate some of the rights we claim in our Bill of Rights into the law of the land. Everything should be on the table: citizenship, legal residency, deferred action, visas and migrant worker programs.

What is as important as standing up for our rights is realizing that we have allies -- a vast majority of those polled favor immigration reform – citizens who vote and have the power we can only hope to achieve in the coming decade with their help. The Undocumented are part of the 41.3 million foreign-born Americans out of a total U.S. population of 320 million. These numbers cannot be ignored indefinitely. Immigrants and their offspring will make up 88% of U.S. population growth over the next half century according to Pew Research. Without this growth, the U.S. will not be able to remain competitive in the world marketplace.

What makes the nation so fortunate is that people want to come for the opportunity. But we need that vital missing piece of the American Promise – equal protection under the law. This is why we must succeed in making our Bill of Rights the national template for a new humane approach to immigration, a total rethinking of how best to align the well-being of the nation with the potential contributions of those whose abilities are constricted not by ambition, talent or work ethic, but by being paperless. We all want the same thing – to live and work and raise our families in America, to be a part of this experiment in democracy and to help make it succeed

The purpose of this document is to awaken and instill courage and cooperation among our leaders, to grow public awareness and to create a crisis of conscience where Americans have to do more than talk about us; they have to talk with us. They must approach this discussion with respect for our determination to add our story to the nation’s proud immigrant anthology.

We’re already here and have been for years. We work hard, take care of our families and have deep roots in our communities. More time is something we don’t have. Our children are getting older without access to equal educational opportunities. Our working adults are unable to reach any kind of wage parity and advance in their professions. We live with no sense of security that our lives won’t be disrupted, our families torn apart.  And we’re constantly berated and stereotyped as a monolithic group to be condemned and ostracized. Being discouraged is one thing; losing all hope of working our way toward legal acceptance is something we can’t abide and the nation can’t afford – morally or economically.

We are calling for action at every level of government for discussion and votes on our Bill of Rights. We are asking political and community leaders, civic groups and labor unions to sign on to our cause. And we’re counting on Undocumented Americans and the majority of Americans who stand with us to add your names to our petition, to organize your neighbors, to talk to your representatives and to donate what you can for us to continue the work of making immigration a unifying and uplifting issue that helps a nation embrace the source of its unique greatness.

We, the Undocumented Americans, submit our Bill of Rights with the same determination as the nation’s founders to incorporate these rights into law across the land.

We are here on American soil working for a stronger economy while reinvigorating the nation’s commitment toward democracy, and we should be afforded the same due process and equal protection guaranteed to all by the U.S. Constitution. We are the living embodiment of the American Dream and how we are treated by this nation reflects its commitment to its own ideals. Going forward, we want to see the United States fulfill its historic democratic promise by making these rights a reality.

As Undocumented Americans, we call on ALL Americans to join us in our pursuit of these rights. Most of those who call the U.S. home are immigrants or descendants of immigrants. We, the Undocumented, join this bold, determined continuum of freedom-seeking humanity as we strive to help build this nation and find our way toward a more inclusive and perfect union.

Like Loading...
Previous article Before the Wall: Life Along the U.S.-Mexico Border Next article Jossie C.-Renewing Her Trust In The System