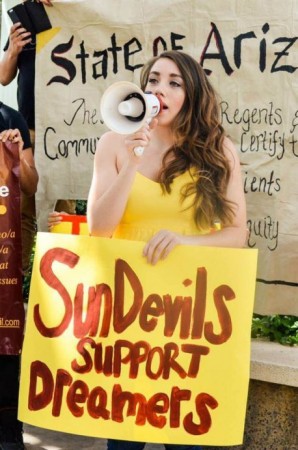 The full meaning of being undocumented didn’t register with Belen until she was 16 -- when her friends started getting their drivers’ licenses, finding part-time jobs and planning for college. Belen had come to the States with her family when she was six. After overstaying their visa, Belen and her mom and dad made their home in Arizona, leaving the rest of their extended family in Argentina.

Attending high school in Florence, Arizona, home of a very conservative population and a large immigrant detention center, Belen and her parents told no one about their immigration status. They simply lived their lives, but not without fear. Belen was very active in high school, making good grades and becoming a varsity cheerleader and homecoming queen. However, she couldn’t accept scholarships or plan a future. Preparing for graduation, she turned to her high school counselor, and for the first time, told someone she was undocumented. The counselor was shocked and could offer no help. Belen didn’t know where to turn. Not having the right papers seemed to change how people saw her and her future.

When President Obama announced DACA the year Belen graduated from high school, she connected with the Arizona Dream Act Coalition to begin the application process. With the coalition, she was surrounded by others with the same dreams who were working hard to achieve them.

With the passage of DACA in 2012, the Maricopa County Community Colleges, where Belen wanted to enroll, decided to offer in-state tuition to all who qualified for DACA. This was her opportunity to attend community college. Within a year, the state’s attorney general sued Maricopa to terminate in-state tuition. There was no injunction filed, so everything would continue until the lawsuit was finally settled. The waiting was agonizing. No one thought the county would win, that Dreamers would gain the right to an affordable education. But they did – this May 2015. What’s more, once the judge ruled on Maricopa, the Arizona Board of Regents made in-state tuition available to DACA recipients throughout Arizona.

By working with the Dream Act Coalition, Belen became braver, even allowing her story to be told in the Arizona Republic where she made the case that her birthplace shouldn’t be allowed to dictate her future. When Belen registered for college classes, she took steps toward fulfilling her dream, a path forward from community college to Arizona State University for a BA in political science, followed by a law degree. This summer she will intern for Arizona Congressman Ruben Gallego and gain firsthand political experience.

Belen is steadfast in her belief that justice must apply to ALL people, not just those with the right papers. She says she will strive high on behalf of social justice for the undocumented as she earns her own rightful place in America.