These TV shows are changing the way we see immigrants, a new study finds

“Ms. Casillas, do you and your brother have a lawyer?” the judge asks.

The little girl shakes her head.

“Do you know what a lawyer is?” the judge replies.

“No,” the little girl whispers.

“Well, do you understand that we are here to determine whether or not you two can remain in the United States?”

“Can I use the bathroom?” the girls asks, clutching her little brother’s hand.

This scene, from the final season of Netflix’s “Orange Is the New Black,” was included in the “Change the Narrative, Change the World” study released Wednesday by the nonprofit media and culture organization Define American in partnership with the Norman Lear Center, which researches and evaluates media at the USC Annenberg School for Communication and Journalism.

The new study found that TV shows with immigrant characters — such as “Ramy,” “One Day at a Time” and “How to Get Away With Murder” — are inspiring viewers to take real-life action.

Researchers looked at how three key immigration storylines from “Orange Is the New Black,” “Madam Secretary” and “Superstore” changed viewers’ understanding of and attitudes toward immigrants.

For Nico Santos, who plays sales associate Mateo Liwanag on “Superstore,” that perception — especially of the immigrants who have entered the country illegally or overstayed their visas — matters.

“For me, as a Filipino immigrant, I know — a lot of members of my family, or close friends, people in my immediate circle — we all know somebody who is undocumented. It’s part of the immigrant experience,” Santos told The Times.

“If you’re an immigrant, you’re going to know somebody who’s undocumented, whether it’s you personally, somebody in your own family, a close friend or a friend of a friend,” Santos said. “It’s just part of how we come to be.”

The more often people watched shows featuring immigrant characters, the report found, the more they agreed that the U.S. should welcome more immigrants.

“Orange Is the New Black” viewers were more likely to become active on social media, letting their friends and followers know that they stood with immigrants in their communities.

Those who watched “Madam Secretary” became more likely to attend a rally and go to community events to support immigrants.

“Superstore” audiences took more immigration-related actions overall: They spoke up for immigrants across social media and in conversations with friends.

As a whole, people who watched these stories also had more inclusive attitudes toward immigrants. They were more comfortable meeting immigrants and more opposed to charging immigrant parents as criminals.

But this was no “ideological bubble.” Survey participants came from all walks of life, political ideologies, geographic locations and racial backgrounds.

The sample spanned 940 adults who were at least occasional viewers of one or more of the three shows in the 2018–2019 season.

The study also took a hard look at content and found that factors like race and immigration status were often misrepresented on TV.

Researchers analyzed 129 unique immigrant characters across 97 episodes of 59 TV shows that aired in the 2018-2019 season, and found an overrepresentation of Middle Eastern immigrants and an underrepresentation of Asian and Pacific Island immigrants — a trend that hasn’t changed since the first report in 2018.

Also overrepresented? Immigrants in the country unlawfully, like Maritza Ramos (Diane Guerrero) on “Orange Is the New Black,” and Mateo Liwanag (Santos) on “Superstore.”

Of the characters that the study analyzed with an identified immigration status, 63% lacked documentation or were asylum seekers. In reality, only 24% of immigrants in the U.S. are unauthorized.

Negative stereotypes kept cropping up too: 22% of immigrant characters were associated with some form of crime, the study found. (Although that is an improvement over 34% in 2018.)

At an episode level, negative buzzwords made up the most commonly represented immigration issues. Deportation, for instance, appeared in 29% of episodes, ICE in 25%, mentions of terms “illegal” in 22% and “undocumented” in 17%.

For the second straight year, no transgender immigrant characters appeared on TV, and those with disabilities and Black immigrants were also underrepresented. 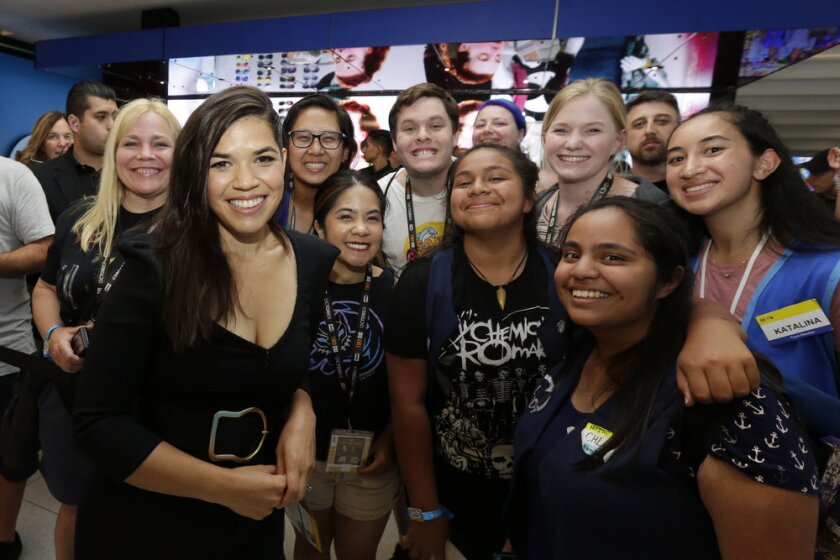 After the Season 4 finale of “Superstore” — in which his character, Mateo (who is a queer, Filipino immigrant just like Santos), is taken away by ICE — Santos received an outpouring of fan support. He saw firsthand how much representation mattered to marginalized groups.

“When you hear stories like that episode meaning a lot: ‘My aunt, my uncle, my brother, I am undocumented, and seeing your experience,’” Santos said. “It’s such a cliche, but representation matters. … All caps. It really does.”

Like Loading...
Previous article Despite Trump’s actions against immigrants, these Latino voters want four more years Next article 15-year-old girl who spent her life in the U.S. facing deportation after hospital arrest