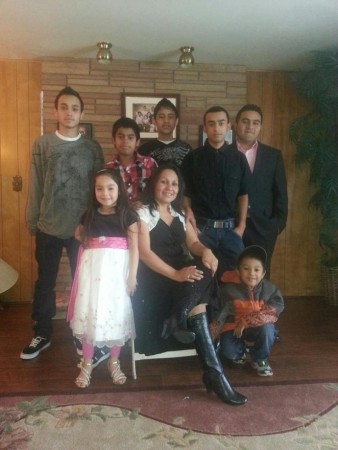 I remember wanting to kill myself when I was seven, but even on tiptoes, I couldn’t reach the rat poison. I was hopeless, living without the love I so needed as a child. My mom had sent my younger sister and me to live with grandmothers and four other children. When, at 10, I persuaded my mom to let us live with her in San Salvador, it turned out to be a terrible mistake. My mom beat me and my stepfather sexually abused me. Desperate to escape, I moved in with a 24-year-old man when I was only 14. When I became pregnant with his son Jose, he abandoned me. Moving back in with my mother to raise Jose, I became pregnant with my stepfather’s child, Oscar, who was diagnosed with cerebral palsy. When I told my mom who Oscar’s father was, I was turned out into the street. I was 17 with a two-year-old and a baby and no place to go. Standing in a torrential rain, holding my two children, I watched a bus approach and thought about throwing myself and my two little ones under the wheels. It was only a belief in God that kept me from this desperate act.

My aunt took us in and I started selling handmade sweets in the local market. I met and married Job Ramirez with whom I had four boys. We lived in a two-room hovel and I worked seven days a week in the market. I struggled to get Oscar to the doctors and to pay for his medications. He was never able to speak, but I knew he was hungry when he cried and I was unable to keep him from crying.  It was an unbearable reality. At 13, he died. Shortly after, my husband and I separated.

With Oscar’s death, I knew something had to change. I was a desperate mother who couldn’t feed her own children. My brother in New York loaned me $6,000 to travel through Guatemala and Mexico to the States. Behind I left my heart, my five boys, with their father and an aunt. I missed my children and mourned the loss of the one who never really had a chance. I couldn’t live with myself, a mother watching helplessly as her children starved. I had worked so hard, but I couldn’t make enough to feed my family.

Before I arrived in New York, I’d planned to work for two years to earn $50,000, which I calculated would pay off bank debts to two banks from my street market business, buy a home for my children and me in El Salvador and pay for their schooling. Since I only had a sixth-grade education, I was determined that my children would grow up knowing how much education mattered.

However, life in New York was no better than in El Salvador. I worked two jobs from 8 am until 1 am. Since I was undocumented, I seemed forever stranded in poor-paying jobs. I had come a long way to work so hard to make so little. The America of boundless opportunities was more a land of nightmares. I left New York after only three months and moved to Utah at the urging of an acquaintance in Ogden. In Utah, I worked for less than minimum wage in a restaurant seven days a week, sending nearly everything I made to the children’s father.

I met and married Eusebio Granda, a Mexican national and a wonderful man. I lost a year’s employment with a blood disorder, but Eusebio found work on local farms making it possible for us to care for our two American-born children, Luisito and Katy, who were able to attend preschool at Centro de la Familia, a federally funded Utah agency that helps migrant workers.

I never stopped worrying about my four children living with my husband in El Salvador. They were all in danger from escalating violence and were even being aggressively recruited by gangs. I paid for two of my children to be smuggled across the border in 2010, but when the last two were apprehended in 2011 by Mexican authorities, I had to find a way to get them out of detention. My husband helped me, through the Mexican consulate, secure a visa to travel to Mexico and fight for my boys’ release. It took me two months to get them released to me and not deported to El Salvador. But we still had to get across the border.

The way back to Utah was frightening. Reaching the border in Texas took three days and nights We were tired, thirsty, hungry and clinging to hope, but it was all for nothing because we were caught and once again faced deportation. Appealing to the 10th Circuit Court and the Board of Immigration was useless. But our local community rallied on our behalf with articles and petitions to save us from deportation. We are still waiting but we’re also being proactive, speaking out and fighting to stay in the U.S. We’re hardworking people who just want to live our lives without the threat of constant violence that has now claimed our home country.

I will qualify for DAPA if it ever makes it out of the courts. This deferred action would help me make real plans without constant fear of deportation and even buy a house for my children. El Salvador is not a safe place for them. It’s not safe for anyone. Here in the U.S., they have many opportunities to be successful people, to make a mother proud. My boys are committed to becoming educated and have won achievement awards, even the President’s Award for Educational Excellence.

I’m a mother, fighter and survivor. Finally, my immediate family is together, but I don’t know how long this will last. I’ve risked everything to make a better, safer life for my children, but I’m terrified that it will all come to an end. I’m not giving up. I’m fighting to stay and think we must all join forces to get the nation to hear our 11-million stories and to provide us with a pathway to citizenship. We have shown how much being in the U.S. means to us. We are earning our right to stay every day.